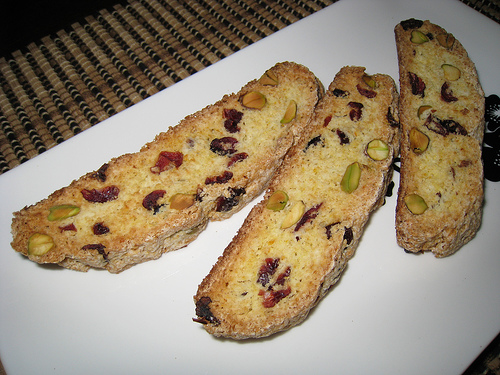 There are only 10 days left until Christmas and I had wanted to do some holiday baking. Since I have never baked for the holidays before I though that I would try some new things. I saw this post about holiday biscotti the other day. I do not remember ever having biscotti before so I though it would be nice to try it. I had also recently just discovered pistachio nuts and I thought it would be nice to bake with them. The red of the dried cranberries and the green of the pistachios make these biscotti fit in well for the holidays. They were pretty easy to make. I tried eating a slice after the first baking and they were pretty good, After the second baking they were really hard and difficult to chew. The biscotti was really nice when dipped in some warm hot chocolate to soften it up a bit. Next time I might have to dip these into some white chocolate.