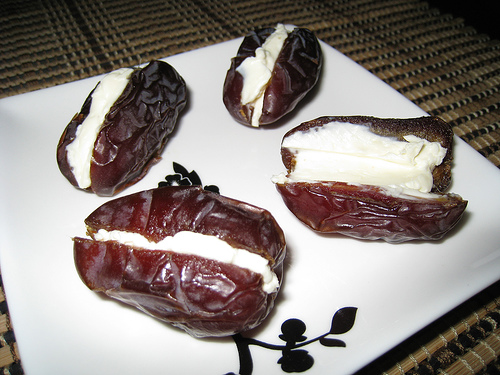 I first discovered dates a few months ago. I saw a friend eating them and I asked what the were. I found a package of small seeded dates at the grocery store and picked them up. I really liked them and ended up snacking on all of them. I have seen several recipes that call for dates and I look forward to making some of them in the near future. In fact the package that the dates came in mentioned that dates could be used as a replacement for sugar in recipes. I like the idea of having found a new way of adding sweetness to dishes that also adds a bit of flavour for something different from plain white sugar.
The other day I was in the grocery store and I saw a package of dates that were easily two or three times bigger than the dates that I had tried the first time. I grabbed a package right away. The package called them Medjool dates. This was the first time that I thought that there might be different kinds of dates so I looked them up and found this article on wikipedia. Apparently there are several varieties of dates. I will be keeping an eye out for them. The Medjool dates were really good! Nice and large and sweet. The label on the back of the package suggested stuffing them with cream cheese and there was no way that I could resist trying. The figs stuffed with soft and creamy cream cheese were amazing!
I was planning on bringing the my pumpkin cake roll to Peabody’s Housewarming Party over at Culinary Concoctions by Peabody but ever since I tried them I have had medjool dates stuffed with cream cheese dancing through my head. They are really simple to make; just slice the dates in half, remove the pits and place some cream cheese on the inside. They make a great appetizer or snack.