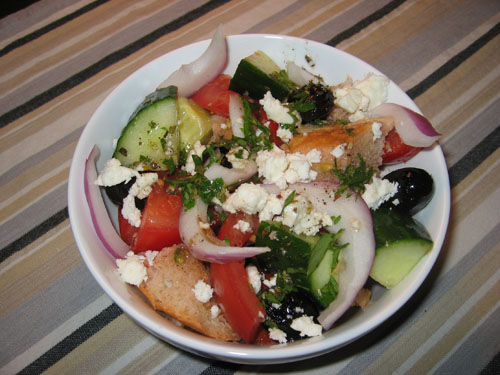 I have been meaning to try a panzanella salad for a while but I never seem to have the old crusty bread when I think about it. A panzanella salad is a salad that includes bread that is typically old and crusty. I had a Greek salad earlier in the week and I still had all of the ingredients on hand. I thought that a Greek panzanella salad would be pretty good. The bread was pretty stale and I wanted it to soften up a bit so I threw it in a bowl and mixed in the tomato so that the bread absorbed all of the tomatoes juice. The salad turned out pretty good. The bread really soaked up the dressing and ended up being pretty flavourful. I will definitely be thinking of a panzanella salad the next time I have some bread that is getting stale.