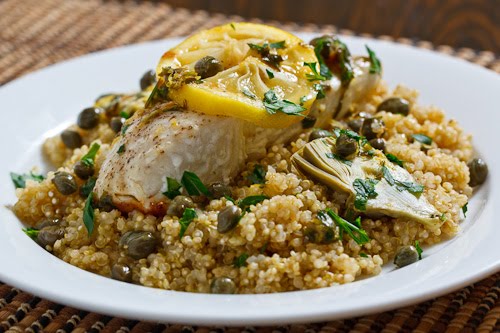 After a few heavy meals on the weekend, I was looking for something on the lighter side and when thinking about lighter meals, seafood often comes to mind. I was lucky enough to come across some more baby artichokes on the weekend that I just had to pick up and I wanted to include them in the meal as I have been enjoying them a lot lately. One of the first things that came to mind was a piccata using a white fish along with the artichoke hearts. This white fish piccata is pretty similar to my favorite chicken piccata where the meat is cooked in the pan and then the pan is deglazed with white wine that along with some lemon, butter and capers forms a tasty sauce that is served over the meat. Picatta is often served over pasta or rice but as I have been using quinoa so often recently, that was the first thing that came to mind and I knew that it would absorb all of the extra lemon and caper sauce that dripped into it. Other than preparing the baby artichoke hearts, this meal is really easy to make, taking no more time than it takes to cook the quinoa and the results are well worth it! The picatta’s lemony sauce works amazingly well with seafood and in this case it also infused the bed of quinoa with its amazing flavour. I served this meal with a side of simple steamed asparagus to give it another hit of springs bounty.

Option: For One-Pan: Make this a one-pan meal by adding 1 cup of quinoa or rice and 2 cups broth or water (or 8 ounces of pasta and 2 1/4 cups broth or water) to the sauce in step 5 and simmer, covered, until cooked, about 20 minutes (or 12 minutes for pasta).
Similar Recipes:
Chicken Piccata
Tilapia Piccata
Pan Seared Tilapia in Avgolemono Sauce
Honey Lemon Chicken
Cod Wrapped in Crispy Potatoes with a Dill and Caper Sauce
Chicken Gnocchi in a Creamy Lemon and Caper Sauce