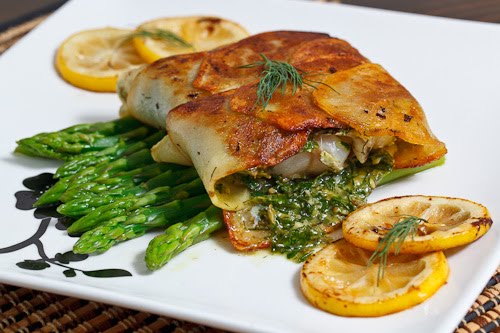 Cod fillets brushed with a lemon, dill and caper sauce, fried in a wrapping of thinly sliced potatoes until golden brown and nice and crispy.

With me wanting to get more fish in my diet I have been keeping an eye out for new dishes and not too long ago I came across this recipe for cod wrapped in crispy potatoes on Kalofagus which caught my eye. I liked the idea of fish wrapped in crispy potatoes, I mean you really cannot go wrong with crispy fried potatoes! In fact this dish immediately made me think about fish n chips where instead of being fish in a crispy deep fried batter with a side of fries you roll them into one to get the best of both worlds and it has the added bonus of being a bit healthier as well!
I very often like to use capers and lemon with fish and this dish has both covered by placing a lemony caper sauce in between the fish and the potato wrapping. Another flavour that I often like like to include with the capers and lemon is dill so I tweaked the recipe a bit by using a bunch of dill in the sauce.
Wrapping the fish in the layer of potatoes can by a little tricky but once you get the hang of it, it is pretty easy. First you need to slice the potatoes very thinly and a mandolin comes in really handy here. Next you need to cook the potatoes in oil until they soften up enough that you can bend them to wrap them around the fish. When you are ready to wrap the fish in the potatoes you want to lay the potatoes out on your working surface in such a way that they overlap each a bit on the sides and interlace on the ends.
Going through the trouble of wrapping the fish in the potato slices was definitely worth it as the final product is fantastic! The potato wrapping does get nice and crispy and when you bite through it you get hit by the amazingly fresh and tasty dill and caper sauce only then to finally hit soft and juicy inner fish layer. Since the local asparagus is still readily available I served the cod wrapped in crispy potatoes on a bed of asparagus and I fried up a few lemon slices as well. Feel free to serve some of the extra dill and caper sauce on the side to smother the asparagus in!

Cod fillets brushed with a lemon, dill and caper sauce, fried in a wrapping of thinly sliced potatoes until golden brown and nice and crispy.

A bright and tasty dill and caper sauce with a touch of lemon.