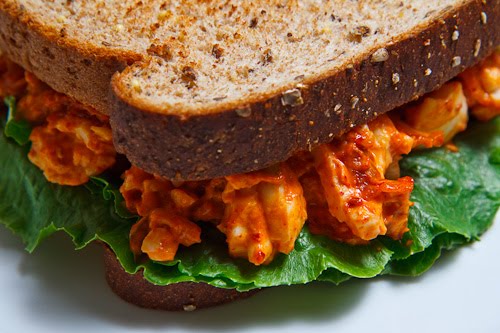 It seems that I could not stay away from the kimchi for too long… A new idea hit me that I just had to try; a kimchi egg salad sandwich. Egg salads generally consist of mashed hard boiled eggs in a mayonnaise based dressing along with anything else that you wish. Since kimchi went so well in the hot cheesy kimchi dip that I recently made I was willing to bet that kimchi and mayo would be another great flavour combination that it would just make an egg salad sandwich. When I think about eggs I naturally tend think about bacon and given that bacon also goes well with kimchi I would definitely be adding some to the sandwich. A sandwich is one of those cases where you need to worry about all of that moisture in kimchi because no one likes a sandwich with wet bread. A great way to remove some excess moisture, and to add flavour at the same time, is to saute the kimchi and caramelize it a bit. Since I would already be cooking some bacon I figured why not caramelize the kimchi in some of the bacon grease for even more flavour? (If you are omitting the bacon, caramelize the kimchi in a touch of toasted sesame oil.) Another great flavour combination is mayonnaise and gochujang (a Korean chili paste) so added a touch of it and it had the nice side effect of boosting the bright red colour. The kimchi egg salad sandwich turned out so well!! All of those individual flavour combinations combined to form something greater than the sum of their parts. I will definitely be making more of these sandwiches! I had better start a new batch of kimchi soon.