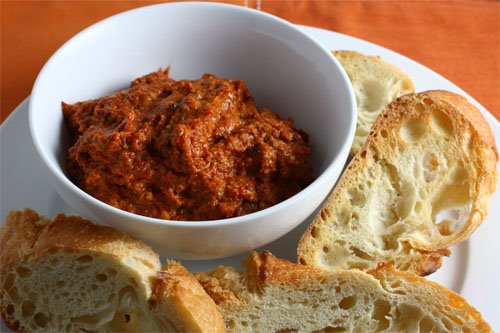 I enjoy eating dips/spreads as snacks and I am always on the lookout for new ones. When I came across a recipe for muhammara I had to try it. Muhammara is a Middle Eastern dip made from peppers and walnuts. Roasted red peppers are one of my favorites foods and I liked the idea of a dip that was based on them and ground walnuts. I also liked that this recipe includes pomegranate molasses as I picked up a bottle a while ago and I hardly get the chance to use it. Many of the recipes that I came across called for aleppo pepper which I have heard good things about. I searched high and low for it but I was not able to find any so I used chipotle pepper instead. Like many dips, this one was as easy a mixing everything in a food processor. The muhammara turned out really well. It was nice and tasty and I really enjoyed the texture that the ground walnuts provided. All of the flavours mixed well and complemented each other and there was a nice heat to it. I served the muhammara with some toasted bread.