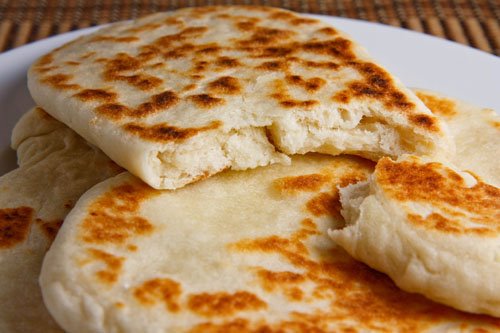 Very often when I see Indian dishes they are accompanied by freshly made naan. Naan is a yeast based Indian flat bread that is traditionally baked in a tandoor oven at very high temperatures. I thought that it would be nice to have some freshly made naan as a side for my palak paneer dinner. I have to admit that I had tried to make naan before and it did not work out too well. I baked it in the oven but it baked hard before it got all nice and golden brown so this time I decided to try something different. I figured that I would have more control if I pan fried the naan and since they were brushed with ghee or butter anyways they were all ready for pan frying anyways. The pan fried naan worked out really well! I was able to get the naan nice an golden brown on both sides! The tops and bottoms were also slightly crispy and the insides were nice and light and fluffy and moist and best of all still warm! I cannot believe how good, and addictive, freshly made naan is! I had a hard time resisting just eating my fill of naan despite the fact that the palak paneer was really good as well. I can’t wait to make another batch of naan!