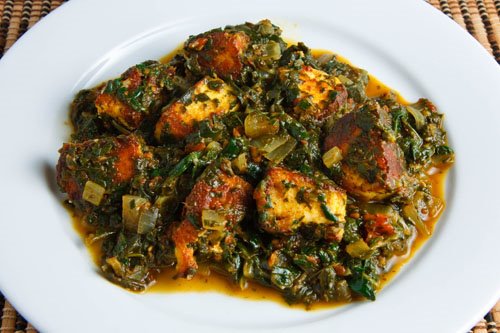 One of the recipes that I had bookmarked to try that used paneer was this one for a palak paneer . Palak paneer is a dish that consists of the paneer which is cooked in a spinach, tomato and onion gravy with Indian spices. Now that I had my own home made paneer I was ready to try making the palak paneer. In this dish the paneer is fried until golden brown on all sides before being added to the spinach gravy to simmer and absorb all of the curries flavours. The palak paneer recipe is pretty easy to follow though I did end up running into one problem. My mini chop ‘food processor’ was not up to the task of truly pureeing the spinach and my spinach gravy ended up being a bit chunkier than I had been hoping for but it was still really tasty. The homemade paneer worked really well in the curry having absorbed all of the tasty flavours of the gravy and it added a great texture to the dish. I served the palak paneer with some freshly made still warm naan which was also addictively good! One thing that I noticed about the palak paneer was that the leftovers tasted even better the next day as the flavours had a chance to mingle and develop a bit more.