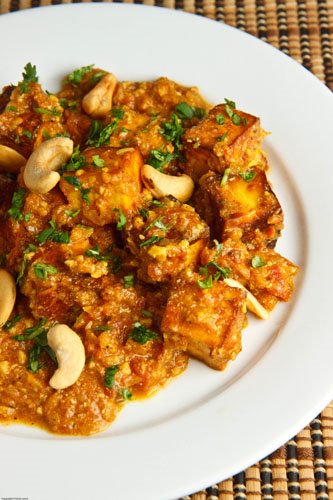 When I was in Little India (Toronto) picking up the alphonso mangoes at an Indian grocery store I took the opportunity to look for some paneer which I had been unable to find anywhere else. I was in luck as I found some bricks of the harder paneer and I picked some up right away. Over the last while I have been building a small list of recipes that I want to try that include paneer but since I had never been able to find any it just kept growing. The first recipe on my list was a butter paneer masala. The basics of a butter paneer masala seemed to be cubes of paneer that are fried in ghee until golden brown in an onion and tomato gravy with spices and ground cashews that is finished with butter and cream. One of the spices in this dish was garam masala which gave me the chance to use some of the garam masala that I had made a while ago. I decided to try to keep the dish a bit lighter and reduce the amount of butter and I replaced the cream with yogurt.
Many of the recipes that I found for the butter paneer masala called for soaking the paneer in water and I was not sure why until I had finished frying the paneer. The paneer was pretty hard after being fried and soaking it in the water softened it up a bit before adding it to the gravy. Needless to say, I tried some of the paneer before adding it to the gravy to see what it was like and it was just like a firm cheese with a crumbly texture on the inside. The paneer was pretty bland and flavourless but that was ok because it readily soaked up the flavours of the sauce that it was cooked in. The butter paneer masala was pretty straight forward and easy to make and it turned out really well. The onion and tomato gravy with cashews was nice and tasty and creamy with a hint of buttery. The paneer had a texture that I enjoyed and it had soaked up all of the tasty flavour from the sauce. I can’t wait to use paneer again and now that I have more of an idea of what paneer is supposed to be I will have to try making my own.