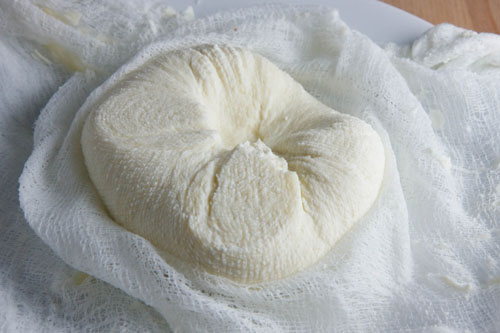 For the longest time I was unable to find paneer and I had bookmarked a few recipes that I wanted to try that called for it. Though I recently found a source for paneer it was pretty far out of the way and I never seemed to have the time to head out and get some. Since I had come across several recipes for making paneer at home that sounded pretty easy I decided to try making some of my own. Making my own cheese had interested me for a while and I finally resolved to try it.
Paneer is dead simple to make! You just bring some whole milk to a boil, mix in an acid such as lemon juice and let the milk curdle. After it has curdled you drain the liquid, form the curds into a block in some cheese cloth or muslin and let it sit with a heavy weight on it for a few hours. At this point you have a brick of fresh paneer cheese just begging to be used!
Since you did not add anything to the cheese other than just enough acid to cause it to curdle, the paneer is pretty flavourless. This is normal and since paneer really absorbs the flavours of the dish that it is in, it will soon be nice and tasty in addition to having a great texture. I saw several posts where the authors suggested adding fresh herbs or other flavourings to the curds before forming them into a brick and weighing them down. Next I will have to try my hand at some flavoured paneers!
Since it was so easy and fun to make the paneer I will also have to look into making other cheeses at home.