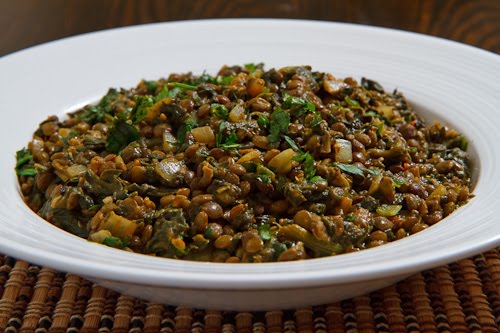 I have been enjoying the spinach and feta flavour combination a lot lately and I thought that it was about time that I branched out and tried something a bit different. Palak dal is an Indian dish consisting of spinach and lentils and it has been on my to try list for a while now. This dish is pretty much just the spinach and lentils along with some warm Indian spices and some chili heat. The lentils could be served as a side or as salad or with the addition of some rice or bread it can easily be a main. Most of the recipes that I found called for urad dal or chana dal but I did not end up having the time to pick them up so I just used the lentils that I had on hand, the green du puy lentils. This dish is pretty simple to make though it does require a bit of time to cook the lentils. The palak dal turned out wonderfully and I quite enjoyed the warm spicy flavour of the creamy lentils and spinach. This is definitely another great way to enjoy some spinach! I even tried adding some feta to the leftovers and that worked really well as well!