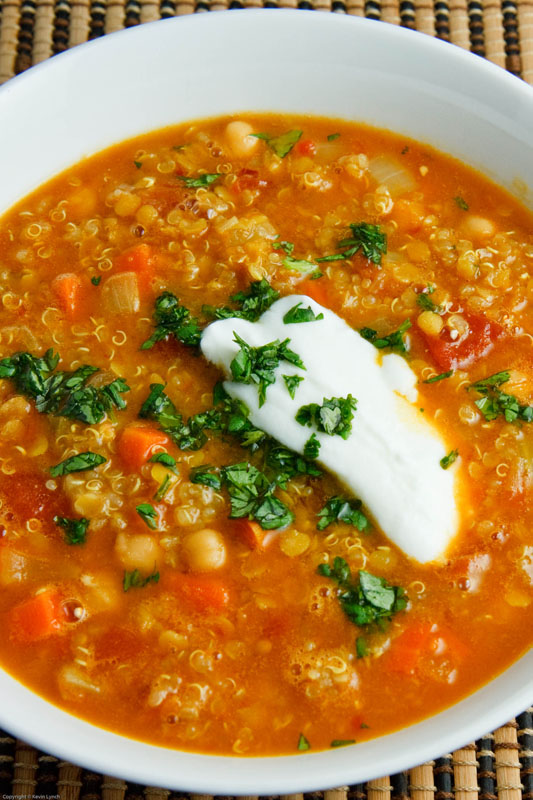 A healthy and hearty lentil, chickpea and quinoa soup seasoned with curry flavours.

Recently I have been enjoying exploring lentils though up until now I have only been using the green du puy lentils. There are many different types of lentils and I wanted to branch out and try a new one. When I was out shopping the bright red lentils caught my attention and I picked some of them up. Despite the fact that we have had a few warm days the weather has gotten cooler again and I was in the mood for a soup. While searching for recipes I came across a few for curried red lentil and chickpea soups that sounded good. Using those two main ingredients as the base for my soup I proceeded to add my favorite soup vegetables; onions, carrots and celery. Next I added some diced tomatoes to add more body and red to the soup. I thought that I was pretty much done but then as I was pulling out the lentils I noticed the quinoa in my cupboard and I recalled that it had worked well in several soups that I had made before and I decided to throw some in as well. I had ended up with a recipe for a nice and healthy sounding soup that also promised to taste great.
Red lentils cook pretty quickly and I only needed to simmer them in the soup for as long as I would have simmered the soup to allow for enough time for the flavours to mingle anyways. The curried red lentil soup with chickpeas and quinoa was nice and easy to make and it did not take long. This soup could easily be made on a week night. I really enjoyed the combination of the red lentils, chickpeas and quinoa and the textures that they added to the soup. The soup was nice and thick and hearty and yet somehow light at the same time. With the curry powder in it the soup was nice and aromatic and it tasted great. I wanted a bit more heat in the soup so I added some chili sauce though you could easily omit it or reduce it or even increase it depending on your tastes. I garnish the soup with some fresh chopped cilantro and a dollop of thick and creamy strained (or Greek style) yogurt.

A healthy and hearty lentil, chickpea and quinoa soup seasoned with curry flavours.