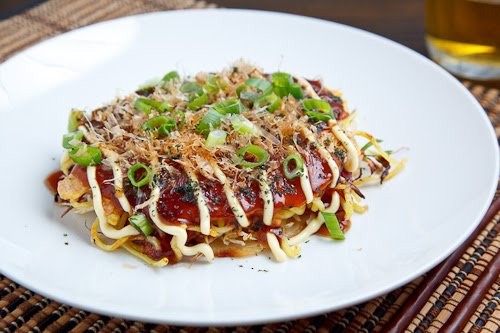 Okonomiyaki is Japanese comfort food also known as the Japanese pancake or the Japanese pizza where the base is made with vegetables and it is commonly topped with a sweet Worcestershire like sauce along with mayonnaise. This is the Hiroshima version of the okonomiyaki is made in a layered fashion.

One of my favourite Japanese dishes has to be Okonomiyaki a savoury Japanese style pancake and luckily it is really easy to make at home so I can indulge whenever I want. Recipes for okonomiyaki vary from region to region in Japan and there are two main styles of okonimiyaki the Osaka style where all of the ingredients are mixed up into a batter and cooked and the Hiroshima style where the ingredients are layered as the pancake cooks. I normally make the Osaka style of okonomiyaki as it is by far the easier recipe but the Hiroshima style okonomiyaki is also really good and definitely worth the effort to make it every once in a while. 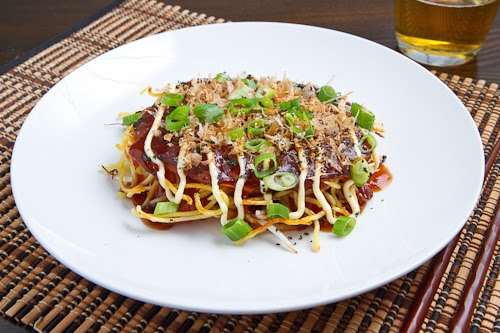 The Hiroshima style okonomiyaki starts out with a layer of the batter being poured onto the pan that is topped with a pile of shredded cabbage and bean sprouts and then some shrimp and bacon. The pancake is cooked until the batter in golden brown and then it is flipped and cooked until the bacon is nice and crispy. At this point some noodles are fried in a separate area and then topped with the rest of the okonomiyaki. Finally an egg is fried and the whole okonomiyaki is placed on top of it with the noodle side down. The okonomiyaki is then served with the egg side up and topped as you like. 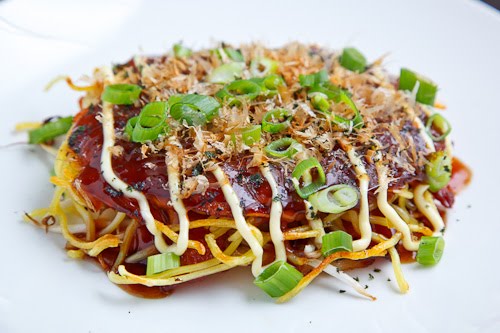 The name okonomiyaki is derived from the word that means “what you like” or “what you want” so really this recipe is just the basis and you can change things up to make it the way you want. I like the cabbage and beasprout mixture for the base but I also like to play around and I often find myself adding things like grated zucchini, sweet potatoes or even pumpkin. I also like to add some seafood and shrimp is probably what I use most often but octopus, crab and scallops work just as well. For the toppings, I like to go with the usual okonomiyaki sauce, like a sweeter Worcestershire sauce, mayonnaise, katsuobushi, green onions and aonori. 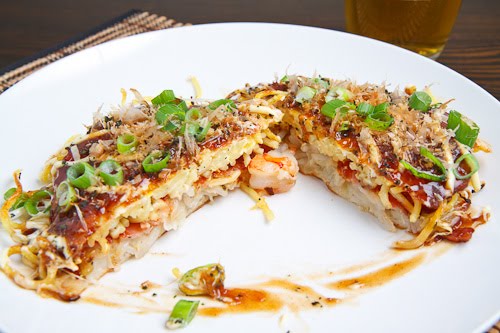 Okonomiyaki is Japanese comfort food also known as the Japanese pancake or the Japanese pizza where the base is made with vegetables and it is commonly topped with a sweet Worcestershire like sauce along with mayonnaise. This is the Hiroshima version of the okonomiyaki is made in a layered fashion.