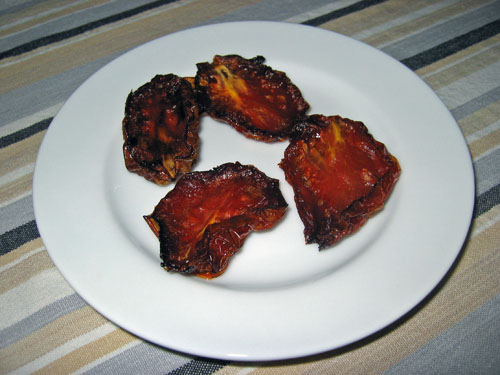 A while ago I was watching Chef at Home the food network and Micheal showed us how to oven roast tomatoes . Given that I really like sun dried I really wanted to try drying my own tomatoes. I searched the web and found a great article on how to slow roast tomatoes here . There was one problem though… tomatoes were not in season. I bookmarked the article and waited impatiently. Tomatoes are now in season I tried my hand at oven drying tomatoes.
It takes about 8 hours to oven roast the tomatoes. Your place is bound to get really hot with the oven being on for 8 hours in the middle of summer so having an air conditioner is really nice. It may take a while to roast the tomatoes but it does not require much effort. You pretty much do not need to do anything for the first 6 hours. At the 6 hour mark you will want to take a look at them. Some of the smaller ones may be done and can be taken out. You will want to take a look at them every once in a while from this point on.
The oven roasted tomatoes turned out pretty good. For some reason they look really dark in all of the photos that I took. They are really tasty. All of the tomato flavour is concentrated into the dried tomato. I ate quite a few of them as they were but I saved enough to use in a few recipes. Oven dried tomatoes can used in a fashion similar to sun dried tomatoes.