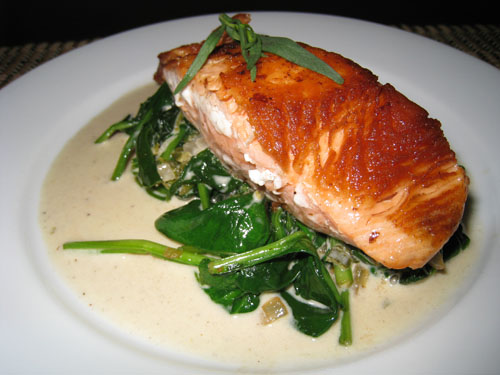 I don’t need much of an excuse to try an new salmon dish but for this one I had plenty. When I read Peter’s glowing review of this seared salmon on spinach recipe I knew that I would be trying it. Salmon has to be my favorite fish and I have been eating it fairly often lately. I was particularly looking forward to this dish because of its use of tarragon which is an herb that I have not used very often. Tarragon have a nice anise like flavour when raw though it mellowed out nicely when it was cooked. The pan seared salmon with tarragon creamed spinach turned out to be really good. The salmon seared up so that it was nice and crispy on the outside and yet it melted in your mouth. The tarragon sauce was nice and flavourful.