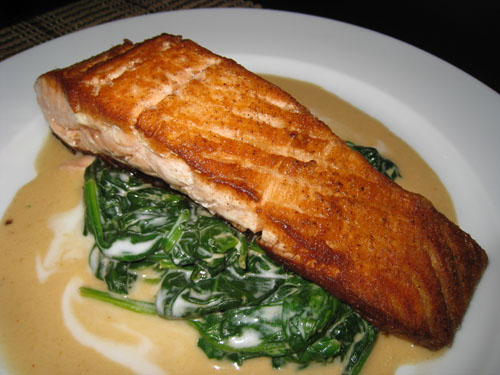 Not too long ago I came across this post about salmon and coconut spinach which sounded really good. I was planning on making some teriyaki salmon to go with the coconut spinach but just as I was about to start I had an idea. The coconut spinach recipe reminded me of a Thai curry so I though why not make it Thai curried spinach? I ended up making a dish of pan seared salmon with Thai curried spinach. The salmon seared up really well! It was nice and crispy on the outside and melt in your mouth on the inside. It went really well with the curried coconut spinach. The curried spinach was super tasty! I really like it when I find green vegetable side dish that is as good as if not better than the main dish. I have a feeling that I will be making this spinach fairly often. The best part is that I am still looking forward to trying the original recipe.