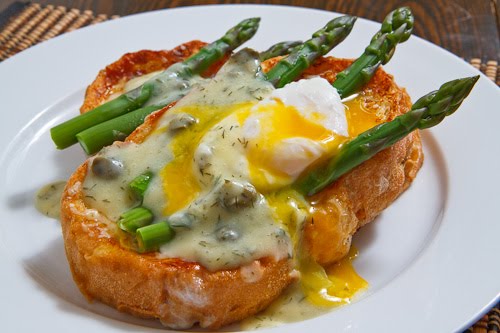 I recently came across the concept of a savoury french toast and it blew my mind! I had never even thought a bout a savoury french toast. I figured that you really could not go wrong with a warm, moist, custardy bread that is fried up until it is golden brown and then covered with melted cheese. I was sold on the idea and I had to try it! The only question was: What to serve on it? Still clinging to convention ideas about french toast, namely that it is a breakfast, the first thing that I thought of was an egg with a runny yolk. But why stop there? Why not kick it up a notch? With asparagus still really the only local fresh vegetable available and considering that it goes so well with eggs, it was the obvious choice. But french toast is normally served with a syrup… Well how about topping the cheesy savoury french toast topped with the asparagus in a dill and caper avgolemono sauce topped with a poached egg that I enjoyed so much?
The savoury french toast covered in melted cheese turned out great! The asparagus in avgolemono sauce and the poached egg with runny yolk only made it better! What a great way to enjoy some of the fresh local asparagus for a lazy weekend breakfast! I can’t wait to experiment further with savoury french toasts!