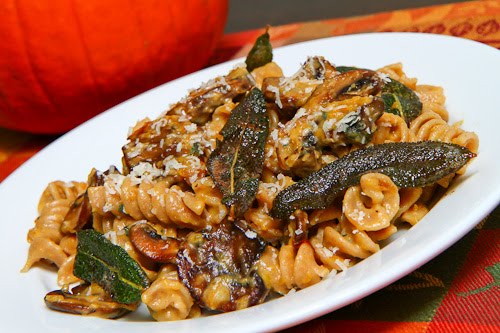 The squash, caramelized onion, sage and gorgonzola flavour combo has been on my mine a lot ever since I tried it in the roasted butternut squash and caramelized onion pizza with gorgonzola and crispy fried sage . I was trying to think of new ways to enjoy this particular flavour combination when I realized that I had not had pasta in far too long. I had some pumpkin puree that I wanted to finish and I thought that a pumpkin, gorgonzola and sage sauce would go nicely on a pasta. For some reason I kept thinking about adding some mushrooms to the pasta and since I was going to be slowly caramelizing the onions anyways I figured that I might add some. In addition to adding some sage to the onions and mushrooms I could not resist frying some sage leaves in browned butter until they were nice and crispy and I used them to garnish the pasta. The pumpkin, gorgonzola, sage, caramelized onions and sauteed mushrooms flavour combo was amazing and it worked really well as a pasta sauce! I can’t wait to try experimenting with this flavour combo some more!

Pumpkin and Mushroom Pasta with Gorgonzola