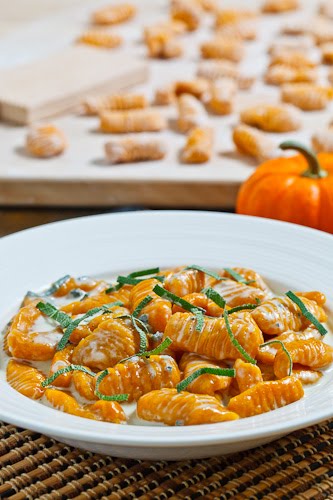 Now that I had my fresh homemade pumpkin gnocchi , the only real question left was; What was I going to make with it first? Although I had a few ideas I just had to go with one of my favourite flavour combinations; pumpkin, gorgonzola and sage. I made a quick and easy sauce by melting the gorgonzola into some milk and cream to which I added some sage and a touch of nutmeg. In less time than it took to cook the gnocchi, the sauce was ready and when the gnocchi was cooked I tossed it in the sauce and served it with a garnish of julienned sage. Once again, the pumpkin, gorgonzola and sage flavour combination did not disappoint! The sweet pumpkin gnocchi was so good all covered in the creamy and tangy gorgonzola sauce which just clung to and all of it’s ridges. I really enjoyed the soft and yet slightly chewy texture of the gnocchi and I am already looking forward to the leftovers tomorrow! Next time I think that I might try adding some sauted mushrooms.