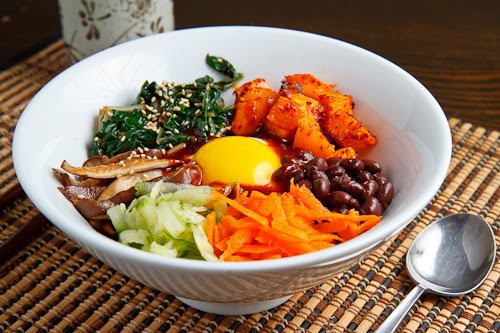 A bibimbap made with quinoa instead of rice and topped with gochugaru roasted butternut squash, black beans, steamed swiss chard, sauteed shiitake mushrooms, shredded cucumber and carrots and a fried egg along with a healthy does of hot sauce.

Last week I came across an article on the New York Times about using quinoa in bibimbap which was an interesting coincidence since I had recently tried the same thing. Bibimbap is a Korean dish that consists of various vegetables and meats served in a bowl over rice with a spicy chili sauce. I have been enjoying exploring new uses for quinoa and it makes a great substitute for rice so I thought that a quinoa bibimbap would be a nice idea. Normally bibimbap has a meat in it but this time I was thinking about a vegetarian version with winter vegetables starting with butternut squash that I tossed in gochugaru, Korean style chili pepper flakes, and roasted until nice and tender. I often like to include spinach in bibimabap but I was thinking that swiss chard would be a nice substitution this time. I then build up the bibimbap with some sauteed shiitake mushrooms, grated cucumber and carrots. I have done a lot of warm quinoa salads recently and I have been enjoying the combination of the beans in those salads so I tried adding some black beans to this bibimbap before finishing it off with a fried egg and some spicy gochujang sauce . Quinoa once again proved how versatile it is working amazingly well as a substitute for rice in this bibimbap where its texture played particularly well with the other ingredients making for one really tasty and healthy meal.
Although it is nice to present bibimbap nice and neat with all of the ingredients showing, it is best to mix it all up before eating it. 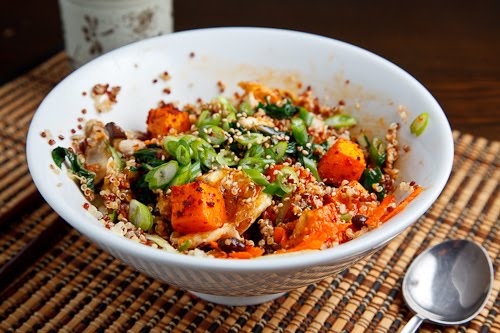 A bibimbap made with quinoa instead of rice and topped with gochugaru roasted butternut squash, black beans, steamed swiss chard, sauteed shiitake mushrooms, shredded cucumber and carrots and a fried egg along with a healthy does of hot sauce.