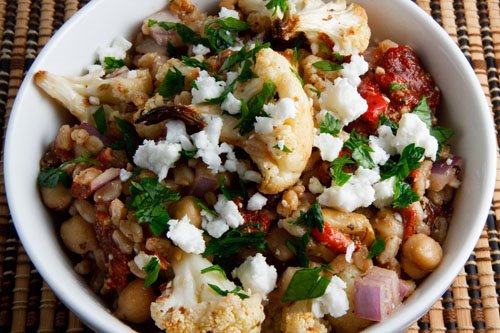 I have been on quite the whole grain kick lately. With lettuce and other summer vegetables that commonly go into salads a bit more expensive now, I have really been enjoying the more wintery vegetables in whole grain salads as a nice alternative. There was one cup of the farro left in my cupboard just asking to be eaten and I knew that it was time for another farro salad. I have just been looking for excuses to roast cauliflower ever since I found out how good it was when roasted and I was thinking that a roasted cauliflower farro salad would be perfect. The next thing that came to mind was adding some tasty roasted red peppers which are always a favorite. I like roasted red peppers so much that I roasted a bunch of them in the fall when they were in season and froze them for later. Now it is pretty convenient to be able to just thaw them out and use them when needed. I finished the salad off with some onions, chickpeas, walnuts and a simple vinaigrette. The roasted cauliflower and red pepper farro salad turned out great! The chewy farro went well with the roasted cauliflower and the roasted red peppers and feta added a ton of flavour. I enjoyed the salad warm the first night and the leftovers were just as good straight from the fridge.