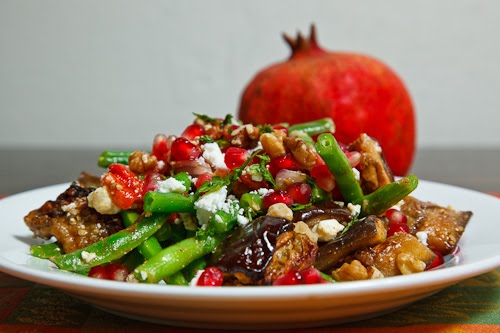 While I was researching the roasted butternut squash and pomegranate salad I came across the idea of a Mediterranean feta salad with pomegranate dressing . Not only did it include pomegranates, that I am currently really into, but it also starred two of my favorite ingredients, roasted eggplant and roasted red peppers. I like both the roasted eggplant and roasted red peppers so much that I could easily eat them plain but this salad sounded too good to do that!
I took the basic idea from the recipe made some modifications. I started by replacing the spices that seasoned the eggplant with the ones that I used in the roasted butternut squash and pomegranate salad as I had really liked them. I then replaced the pomegranate dressing with the pomegranate vinaigrette that I had been using recently. I also added some chopped toasted walnuts and I replaced the parsley with some mint which I though would go better in the salad.
Eggplant can sometimes be bitter and the trick to a good eggplant dish is to properly salt the eggplant before using it. You want to generously sprinkle the eggplant with salt and let it sit for a good 20-30 minutes and then rinse the salt and and pat it dry. If you do this you won’t have to suffer through bitter eggplant again. The roasted eggplant, red pepper and green bean pomegranate salad turned out amazingly well! The eggplant was roasted perfectly, such that it practically melted in your mouth and the spices coating it were really nice. This salad was an amazing combination of spices, flavours, texture and even colours! I have been making a lot of pomegranate salads lately and this one is easily my favorite!