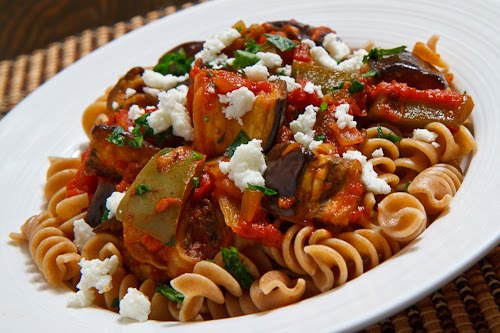 Sometimes it seems like I am in a never ending battle to clear space in my freezer. I am constantly trying to use things from my freezer to make some more room and then the next time I look I am out of free space again. This weekend I was looking through my freezer and I came across a stash of tomatoes that I had roasted during the summer when they were in season. I had roasted them up hoping to get the chance to use them in a pasta sauce which was fortuitous as I had recently been contemplating making an eggplant pasta. I was thinking that eggplant in a simple tomato sauce would be a nice flavour combo for pasta. Roasting vegetables adds so much flavour and I thought that it was only fitting to roast the eggplant since the tomatoes were roasted as well. With the main ingredients decided, I threw in some staples including onions, garlic, green peppers, etc. I decided to go with a Mediterranean flavouring for the sauce and spiced it with some oregano and smoked paprika. Of course I could not resist finishing the pasta off with some some cheese, in this case some crumbled feta.