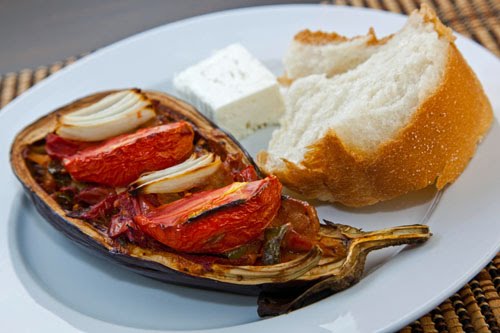 When I was at the farmers market picking up the red peppers and the tomatoes for the gemista that I recently made, I could not resist picking some up some eggplants and I knew exactly what I wanted to do with them. Another one of the more memorable dishes that I tried in Greece was a slow roasted eggplant dish that was covered in a really simple and tasty tomato and onion sauce. Once again I was surprised that something with so few apparent ingredients could be so tasty! Not wanting the eggplant to be left out of the slow roasted vegetable fun I was planning on trying to reproduce the dish at home. I did not catch the name of the dish while I was in Greece but after a quick search I came across a recipe for imam baildi by Peter on on Kalofagas that seemed to have all the right ingredients.
The version of this dish that I had in Greece was very oily and I decided to try to cut down on the olive oil as much as possible. Normally the eggplant shells would have been fried in oil but I went with oven roasting them as I really enjoy oven roasted eggplant and it does not need a lot of oil. Other than the eggplant I used perfectly ripe field tomatoes in the sauce and I let the sauce slowly simmer until it thickened to let all of the flavours come out. The final step was to fill the eggplants with the sauce and slowly roast them in the oven until everything was nice and tender and the tomatoes on the top started to caramelize. The imam bayildi turned out really well! Everything was nice and tender and just packed full of amazing flavour. Though the photo looks a little dry, once you cut into it, all of the juices started to flow and it was actually nice and moist. I served the imam baildi with feta and some crusty bread.
I was thinking that another way to do this would be to use broiled sliced eggplant instead of the eggplant shells. I would place the eggplant slices on the bottom of a baking dish and then just cover everything with the tomato and onion sauce. I will try it this way next time and I imagine that I will need to double or triple the sauce recipe. This way should be a bit easier than having to scoop out the eggplant and use it as a shell.