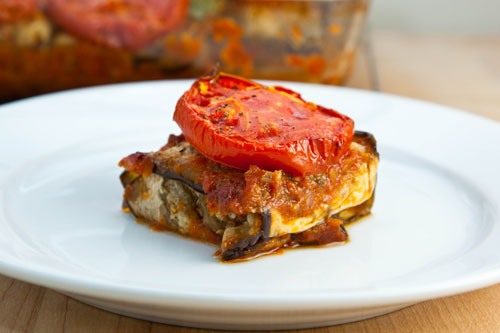 The farmers market has been full of early falls bounty lately including lots of eggplants, tomatoes and peppers. I really enjoy eggplant and I am always on the lookout for new ways to use it and I recently came across a really interesting sounding recipe for kebabs wrapped in eggplant baked in tomato sauce on Elra’s Cooking . Kebab is a variety of meat dishes in Mediterranean cuisine where in this case it is a spiced ground lamb with lots of herbs that is wrapped in eggplant and then roasted in tomato sauce. One thing that I have always found interesting in Mediterranean is the use of cinnamon in meat dishes and I was kind of expecting/hoping to see it in this recipe and when I did not I added some for that hint of exotic. The next change that I made to the recipe was to broil the eggplant slices rather than frying them in oil to lighten up the dish a bit. For the tomato sauce I used a simple marinara sauce recipe except that I roasted the tomatoes first to add even more flavour. Though the eggplant wrapped kebabs took a bit of time to make, everything was pretty easy and they turned out great! I really like the way that the tomato slices on top roasted down to perfection, caramelizing slightly and concentrating their flavour. The eggplant worked really well as a wrap and meat on the inside was nice and moist and tender and tasty. The roasted tomato sauce finished off the dish nicely adding a ton of flavour. I served the kebab wrapped in eggplant with some feta and some crusty bread.