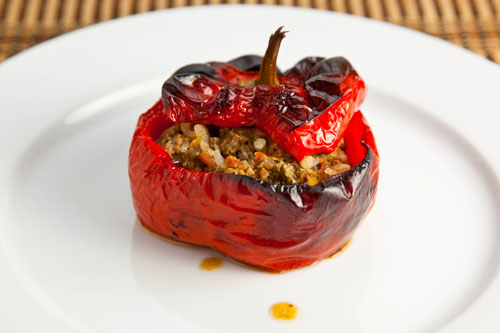 There are so many great vegetables at the farmers market these days and with the temperatures cooling down I am no longer as hesitant about having the oven going for long periods of time. Being able to have the oven on opens up the possibility of slowly roasting those vegetables from the farmers market to bring out their full flavour. One of the roasted vegetable dishes on my to do list was gemista/yemista or Greek stuffed vegetables. When I visited Greece on vacation last year I had the opportunity to sample both stuffed tomatoes and stuffed peppers and I enjoyed them so much that I wanted to try making them at home. What surprised me about the gemista was how simple they seemed ingredient wise and yet they were so full of flavour! My feeling was that using high quality ingredients and slowly roasting them into caramelized perfection was what made them so good. I decided to wait until it was tomato and red pepper season to try making the gemista so that I would be starting with perfectly ripe specimens.
The gemista that I had in Greece were vegetarian but I wanted to try a meat version and I was thinking about using lamb but since I had just had lamb recently I decided to go with beef. From there I went with some standard Greek ingredients including some oregano and a bunch of fresh herbs. I used a simple tomato sauce in the filling and I roasted the tomatoes in the sauce to give it even more flavour. The stuffed peppers and tomatoes were pretty easy to make, you pretty much just mix the filling ingredients, stuff the tomatoes and peppers and slowly roast them in the oven. The hardest part about the recipe was waiting for them to slowly roast while they were filling my place with an amazing aroma. When I pulled the gemista out of the oven the tomatoes and peppers were roasted to perfection and they were so soft and tender that you could easily cut through them with a fork. The filling was nice and moist and juicy and just it was just packed with flavour. I served the gemista with a slab of feta which made for a really tasty meal.