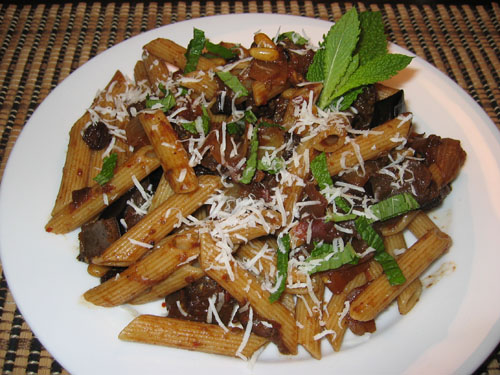 Not too long ago I came across this recipe for Caponata which was really interesting. The use of cocoa powder in a savory dish that also contained my favorite eggplant propelled this recipe to the top of my to try list. I had never had caopnata before. From what I understand it is usually eaten as an appetizer. I used the caponata in several main course types of meals.
I decided to broil the eggplant and cut back on the amount of oil. I didn’t think that there was enough marinara sauce so I increased the amount of it in the recipe. The cocoa powder did not really play a prominent role in the caponata. Combined with the cinnamon, sugar and raisins the cocoa powder created a nice sweetness that did not overwhelm the other aspects of the dish. Of course the cinnamon gave the dish a great aroma. The balsamic vinegar added a nice tartness and the tomato sauce added great savoriness. The heat provided by the red pepper flakes were a really nice addition. Mint once again proves its versatility by complimenting the dish with a nice freshness. I enjoyed the caponata leftovers in a variety of ways.

Similar Recipes:
Roasted Eggplant Pasta
Take a look at the Presto Pasta Nights roundup at Once Upon a Feast.