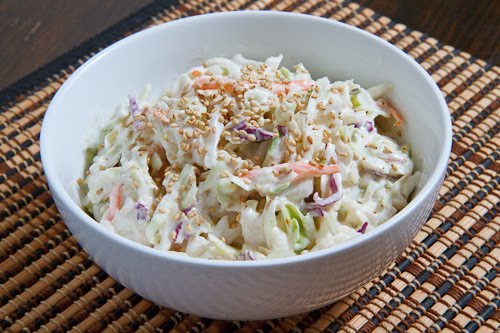 The Korean bbq pulled pork seemed kind of lonely in the bun all by itself and it needed a friend. At first I was thinking of adding some shredded lettuce in a Korean sesame vinaigrette and onion and cilantro relish but then I thought, it’s a pulled pork sandwich so it just has to be slaw. But with the Korean flavours in the bbq sauce I felt that it could not be just any old coleslaw so I set about coming up new a new Asian twist on coleslaw. I had recently come across the concept of a sesame mayo which sounded nice and so a mayo based slaw with sesame flavours in the form of sesame oil and sesame seeds became the base of the slaw. From there, I added some freshly grated ginger, some freshly chopped cilantro and some green onions to round things out. The sesame, ginger and cilantro flavours worked really well in this coleslaw and it paired nicely with the Korean flavoured bbq pulled pork in the sandwiches.