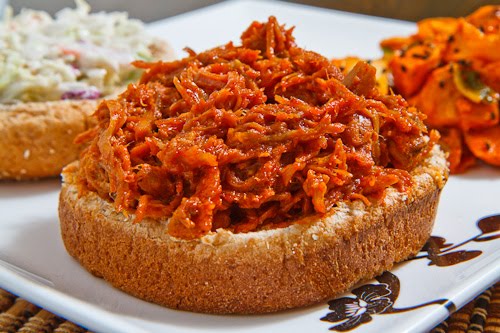 A couple of weeks ago, when I was making the bbq sauce for the bbq chicken with blue cheese slaw wraps it reminded me of another sauce, a gochujang sauce that I have been making for a few years now. This gochujang sauce goes great on things like bibimbap and bibimguksu but it is also a great Korean style bbq sauce. It has all of the bbq sauce elements including spicy heat, sweetness, saltiness and tanginess, not to mention that it is packed with flavour and it has the amazing aroma of sesame. I also realized that I had yet to post about this use of the gochujang sauce.
With the summer here I have been thinking about pick-nick and bbq food a lot and recently I had been thinking of slow roasted, moist and tender pulled pork smothered in a sweet an spicy bbq sauce. With that I knew that it was the perfect time to roast up a pork butt and make some Korean style bbq pulled pork sandwiches. Though, with the heat in the summer I actually prefer to use the slow cooker to cook the pork. With the slow cooker you cannot get those nice crispy charred edges but it is convenient and it even allows you to easily make pulled pork on a weekday. You really can’t have a pulled pork sandwich without some slaw so I made some sesame and ginger coleslaw and continuing along with the pick-nick food and Korean flavours themed I made a kimchi sweet potato salad to go along with the sandwiches.
This Korean bbq pulled pork is pretty versatile and you can use it in any number of things from these sandwiches to tacos similar to these Korean short rib tacos inspired by the Kogi tacos of California. Of course the Korean bbq sauce also goes well with shredded chicken.