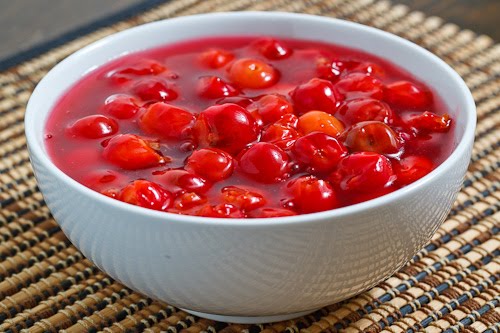 During the winter I made a sour cherry sauce and of course at the time the only sour cherries that were available with the ones in jars preserved in syrup. I remembered thinking that I had seen some sour cherries at the farmers market during the summer but with so many other things to choose from, they had disappeared before I had gotten the chance to pick some up to try. Last weekend the farmers market was flooded with sweet cherries and to my delight there was even a small offering of sour cherries which I picked up right away!
After devouring half of them I quickly got to making a sour cherry sauce using the fresh sour cherries before they all disappeared. I kept the sour cherry sauce recipe pretty simple with just sugar, water and a splash of lemon juice in addition to the cherries. The one thing that I wanted to do was make sure that I got the balance between the sourness of the cherries and the sweetness from the sugar just right as I did not want to completely obliterate the sourness. While initially simmering everything I added the sugar a bit at a time and taste tested as I went until I got it to the point that I wanted.
It is probably no surprise, but I have to say that the fresh sour cherry sauce put the preserved version to shame. This sauce is so amazingly good! The sour cherries flavour comes through beautifully hit a hint of the sourness that is mellowed by sweetness. And just look at that amazing shade of red! This sauce would be perfect on some vanilla ice cream, or on plain or vanilla yogurt or even as a syrup on pancakes. I can’t wait to try it out on something and I know exactly what the first thing will be.