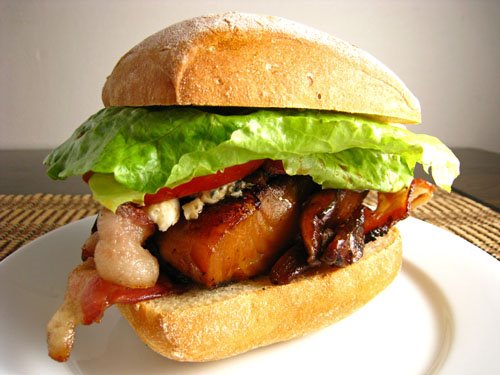 Sandwiches and burgers have been on my mind more often as of late. I had seen a few recipes for salmon burgers that sounded tasty but there was one problem; they called for grinding the salmon to form a patty. I didn’t really want to grind up a perfectly good piece of salmon so I decided to just use the salmon as it comes. I could just imagine a warm and juicy salmon burger dripping with tasty teriyaki sauce! But the burger needed something more. The easy ones were the lettuce, and tomato and I though that salty bacon would go well with the teriyaki sauce. A while ago I made some teriyaki shiitake mushrooms and I thought that they would go perfectly in the burger. I thought that my sandwich was complete and then another idea struck; tangy blue cheese melting into the warm teriyaki mushrooms would be perfect! Of course I had to go with my favorite bun, a ciabatta bun. When I was at the fish monger I saw some black cod which I had been meaning to try and I changed plans and went with a black cod teriyaki burger. The burger was a bit of effort to put together but it was well worth it. The teriyaki black cod burger with sauteed teriyaki shiitake mushrooms and blue cheese was amazing. All of the flavours combined well, contrasting and complementing each other. The black cod was excellent. It had a texture that was similar to that of salmon and it was really tasty done up in the teriyaki sauce.