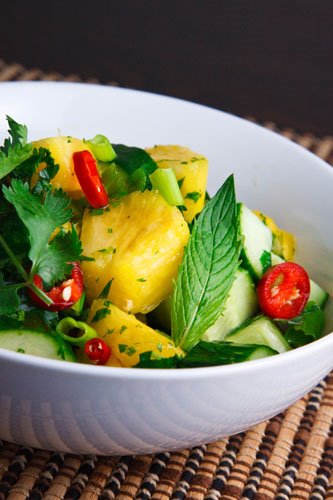 While I was at the grocery store I noticed that they still had cheap pineapples and I remembered coming across the idea of a Thai pineapple and cucumber salad while I was researching the Thai pineapple fried rice that I made recently. Using pineapple in a salad had sounded like a good idea and I remembered wanting to try it out. I started with the base of the salad being the pineapple and the cucumber and from there I added a bunch of fresh herbs including some green onions, cilantro and mint. For the dressing I went with some pretty classic Thai flavours including fish sauce, lime juice, a birds eye chili and some palm sugar to round things out. I also had a large red chili that needed to be used so I threw that in as well though the birds eye chili certainly provided enough heat. The cucumber and pineapple salad turned out really nice! With both the cucumber and the pineapple being nice and cool and juicy this salad is perfect for warm summer days. The dressing was a really nice balance of salty, tart, and spicy hot and the sweetness of the pineapple balanced it out really nicely. The chopped up birds eye chili was one of my favorite parts of this salad as every once in a while you would get hit by and intense burst of heat but then the next bite would be full of juicy, quenching pineapple and cucumber.