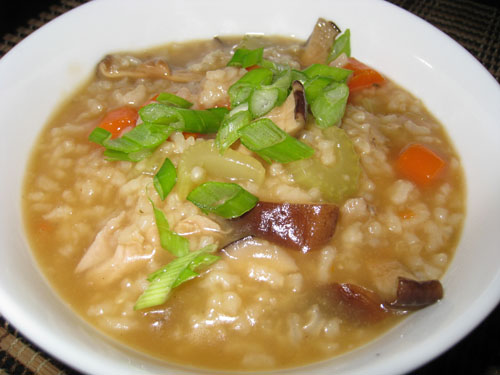 I came across this recipe for turkey congee a while ago that looked interesting. I had never had a congee before and so I wanted to try it. A congee is a rice porridge. I made sure to set aside some of the turkey leftovers from my holiday turkey dinner to make the turkey congee. I was not able to find the dried scallops that the original recipe called for and I forgot to pick up the dried shrimp. Luckily I had some dried shiitake mushrooms on hand and they were listed as a possible alternative. Instead of cooking the congee with the turkey bones I used the turkey stock that I had made using the bones. Although the congee took a while to cook it did not require that much hands on time. The aroma of the congee from the turkey stock and the shiitake mushrooms was amazing. Despite the nice aroma the congee had a fairly subtle flavour. At first I was a bit disappointed but as I ate it, it grew on me. By the time that I had finished the bowl I realized that I was really enjoying it. I guess that flavour does not need to be super strong to be good. I also really liked the creamy texture of the congee. I will definitely have to look harder for some dried scallops to try the next time I make this.