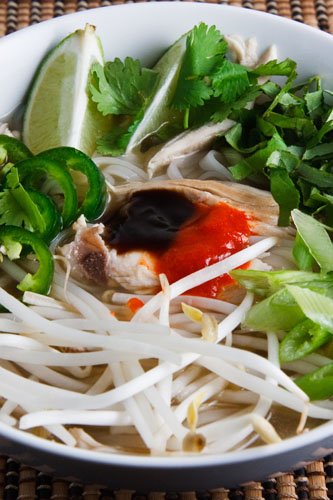 Whenever I cook turkey or chicken I like to save the bones and store them in the freezer until I have enough to make some stock. I had finally saved up enough turkey bones to make some turkey stock and I knew exactly what I wanted to use it for. I had come across the idea of using leftover turkey and turkey stock to make a turkey pho a while ago that sounded really good. I had been wanting to try making a pho for a long time and now was the perfect opportunity. Pho is a Vietnamese rice noodle soup with a clear broth that is commonly flavoured with star anise, cloves, cinnamon and charred ginger. Beef is more commonly used but any meat will do and this time leftover turkey was on the menu. Once the stock was made it was pretty easy to infuse it with the star anise and other pho flavourings and the rest of the soup was a piece of cake to make. The leftover turkey pho turned out great! It was nice and light and fresh and I really enjoyed the star anise flavoured turkey broth. One of the things that I liked most about the pho was all of the fresh garnishes as they reminded me of warmer days. I will definitaly be making pho again and I think that next time I will be try the more classic beef version.