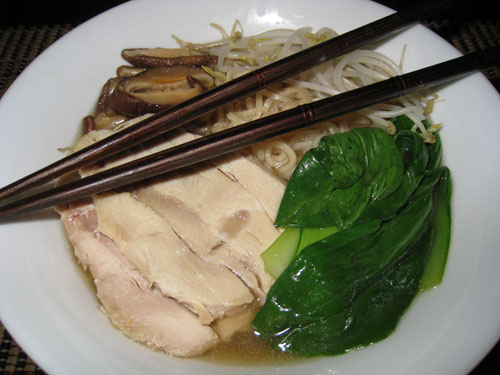 I only had a little bit of the turkey stock left and I knew exactly what I wanted to do with it. I had not had ramen in a while and I had been craving it. The flavour of ramen is greatly determined by the quality of the broth. Although you can make tasty ramen with store bought stock a good home made stock will always be better. The only problem was that I only had 1 cup of turkey stock and I needed 2… I decided to soften some dried shiitake mushrooms in a cup of boiling water and use the resulting mushroom flavoured water for the remaining liquid component of the broth. This added a really nice shiitake mushroom flavour to the broth. The final component of the broth was a tablespoon of miso paste. I decided to finish the ramen off with some baby bok choy and bean sprouts. Everything was simmered in the broth thus adding even more flavour to it. The turkey ramen turned out pretty good. The broth was really tasty! I was in a bit of a rush and I completely forgot about the green onion! It is so nice to have turkey leftovers!