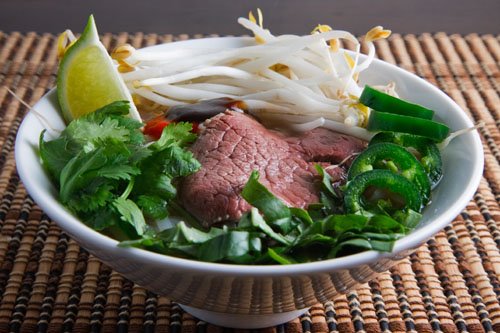 A while ago I made a turkey pho using some homemade turkey stock and leftover turkey and I really enjoyed it. Pho is a Vietnamese rice noodle dish with a broth flavoured with star anise. The classical pho is made in a beef broth and is served with beef. Ever since I made the turkey pho I had been wanting to try making the traditional beef pho (or pho bo) from scratch. I started looking for a recipe in my bookmarks and the one that caught my attention was the one for pho bo on eatingclub vancouver . From there I amalgamated what I liked from a few different recipes to come up with this one.
The first step was to make the broth which required simmering beef bones for several hours. Luckily I was able to find the beef bones pretty cheap at a local butchers shop. This recipe calls for 2 cuts of beef in addition to the bones. The first cut of beef is a cheap cut that is simmered in the broth until it is falling apart tender. This adds even more flavour to the broth and then the braised beef goes into the final soup as well. The beef broth is also made with the star of the show, the star anise, and cloves, cinnamon, charred onions and ginger, fish sauce and sugar. Just with that list of ingredients it is sounding really tasty! Nice and beefy and sweet and salty and star anise’y with a hint of spices.
Once the broth is ready you are just about done; all that is left is to cook the rice noodles and assemble the soup. To assemble the soup, you place the braised beef in a bowl and top it with the cooked rice noodles followed by the second cut of beef, which is thinly sliced, along with the bean sprouts. The broth is brought to a boil and poured over the beef and beansprouts into the bowl. The boiling broth just ‘cooks’ the thinly sliced beef and blanches the beansprouts right in the bowl. Because you are just barely cooking the thinly sliced beef you will probably want a really nice and tender cut of beef like a tenderloin. Next you throw on your condiments such as basil, cilantro, jalapenos, hoisin sauce and chili sauce.
The pho bo broth took a bit of work and time to make but it was well worth it! It was nice and tasty and I really enjoyed the star anise flavour in a savoury dish like this. Other than the star anise, what I liked most about this soup was that it was nice and light and with all of the topping is was fresh and summery. The thinly sliced ‘raw’ beef on top was just perfectly cooked and nice and juicy and tender. What a great soup to enjoy on a cold winter day! Luckily I have leftovers so I will get to enjoy it for a few more days!