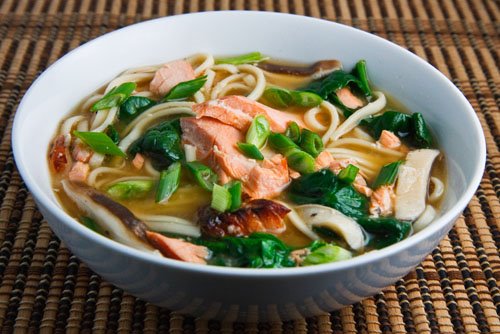 After all of the snacks that I had on the weekend I was looking forward to something lighter. A while ago when I made the chicken noodle soup I thought that an Asian style salmon noodle soup would be really nice and it was the perfect time to try it. When I think of salmon the first thing that usually comes to mind is salmon teriyaki which is my favorite way to enjoy salmon. Since I was going to have salmon in the soup I might as well take the opportunity to add some flavour so I decided to use salmon teriyaki for the salmon in the soup. This would be a great way to use up some leftover salmon teriyaki. For the noodles I decided to go with some nice thick udon noodles though I was also thinking about soba noodles. Given the Japanese flavours in the soup so far dashi was the natural base for the soup and of course miso was the next logical step. I rounded the soup off with some shiitake mushrooms and spinach. The salmon noodle soup was really easy to make and it turned out even better than I had hoped! All of the flavours came together really well. The slight sweetness of the teriyaki’d salmon went well with the saltiness of the miso. The soup was nice and filling and yet surprisingly light and good. I will be making this again!