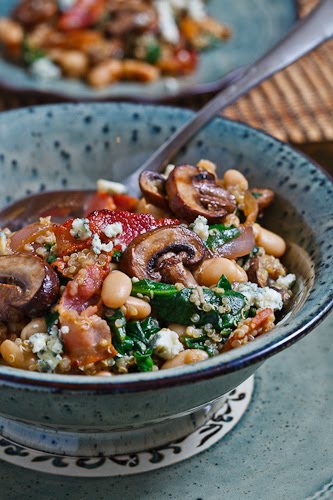 Yeah! Blogger is back! Hopefully it does not gobble up any more posts or comments!
Although I am still impatiently awaiting the arrival of the first of the local spring produce I have started getting into the habit of eating lighter meals including more salads. Not too long ago I came across the idea of a warm white bean and spinach salad on How Sweet It Is that I was immediately drawn to. As I read through the ingredients I quickly realized why, as the spinach, bacon, sauteed mushrooms and onions reminded me of one of my favourite salads the spinach salad with bacon, caramelized onions, mushrooms and blue cheese . I quite enjoy combining quinoa and beans in warm salads and I figured that adding them to the spinach salad could only be good and so I did just that. For the recipe, I pretty much just started out with my spinach salad with bacon, caramelized onions, mushrooms and blue cheese salad and added the spinach to the pan to wilt followed by some white beans and quinoa.
Don’t let the spinach, beans, mushrooms and quinoa fool you as below this salads healthy surface lies a dirty little secret and that secret is a heart full of flavour, and that flavour is provided by both the bacon and its grease. First I cook the bacon and set it and some of its grease aside. The mushrooms and onions are then slowly cooked in the remaining bacon grease until they are nice and golden brown. After cooking the bacon and caramelizing the mushrooms and onions in the same pan, its bottom is sure to be covered little brown bits that are just full of flavour! It would simply be wrong to let that flavour go to waste so I mix the salad dressing right in the pan and the vinegar in it helps pick up all of that flavour by deglazing the pan. The remaining ingredients of the salad dressing include the reserved bacon grease and some Dijon mustard. The final component of flavour in this salad is a touch of crumbled blue cheese that starts to melt into the salad which is served warm. You don’t want to overpower the other flavours in the salad by using a lot of blue cheese but just a bit really enhances the salad and makes it truly special. With this salad you get the best of both worlds with lots of healthy ingreadients and lots of flavour! 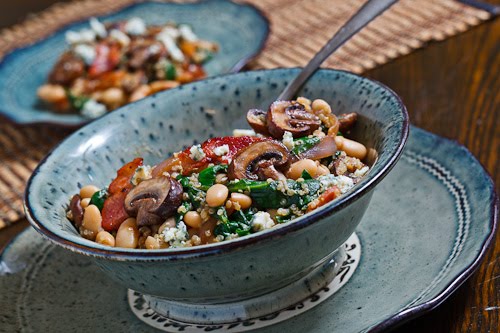