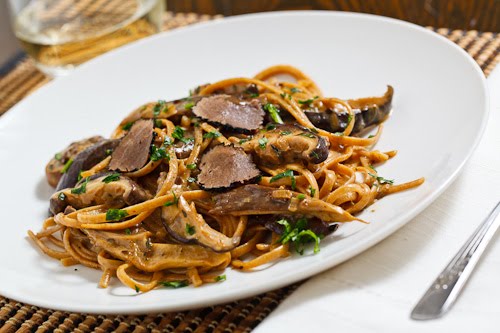 When I was in Italy on vacation I had the great luck to come across something that I had been wanting to try for a long time, truffles. I first came across them on a menu at a restaurant in the form of a pasta that also included one of my favorite foods, mushrooms. As soon as I saw that there was no need to read the rest of the menu and I ordered immediately. I was a bit disappointed to see that there were not all that many mushrooms in the pasta but it tasted great and the aroma and flavour was undeniably amazing! After that encounter I made a point to look for truffles and I quickly came across some truffle oil and eventually I found a small jar of truffles both of which I picked up. Now that the chaos of Thanksgiving was over I finally got the chance to come up with my own version of a mushroom pasta with truffles.
I knew that I wanted some nice sized pieces of mushrooms in this one so I started with a bunch of wild mushrooms including shiitake, oyster and cremini. The mushrooms in the pasta that I had in Italy were likely dried porcini mushrooms and since they, and the liquid that they have been soaked in, have such a strong and concentrated mushroom flavour I could not say no to them. I wanted the mushroom and truffle to dominate so I kept the other flavours down and went simply with a shallot, a bit of garlic and thyme. Cream works nicely as both a binder and for helping to absorb and distribute the flavour so I added a bit near the end without drowning the pasta in it. Of course I finish the dish off with the star of the show in the form of truffle oil and some shaved black truffles. The mushroom and truffle pasta turned out to be even better than the one that I remember having in Italy! I will definitely be making this a lot in the future!