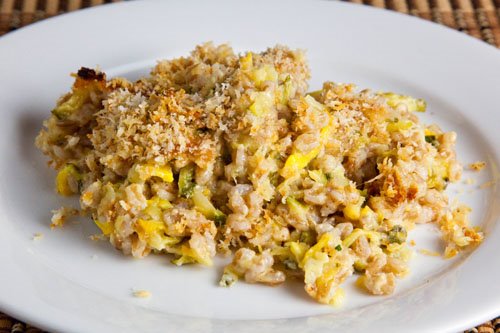 One of my favorite summer vegetables is the zucchini also known as courgettes or summer squash. They are one of my favorites both because I like them and because they are always nice and cheap while in season. This weekend I finally noticed the locally grown zucchini at the farmers market and I picked up a bunch of them already knowing what I wanted to make first. I had come across a recipe for a summer squash and farro gratin on Cooking with Michelle that combined the zucchini with a whole grain. I have really been enjoying whole grains lately and I liked the sound of combining the zucchini with the farro, and the melted cheesy goodness was just the icing on the cake.
Sometimes I find myself worrying about the size of ingredients and this time I was thinking that it would be nice if the zucchini was cut to a size that was similar to that of the farro. Since farro is pretty small I decided to just grate the zucchini which also ended up being a lot easier than dicing it. Since the zucchini was grated into such small pieces I figured that I could just add it to the gratin without sauteing it first. I went with equal parts green and yellow courgettes to add some extra colour in the dish. Having to cook the farro, make the bechamel sauce , saute the onions and finally bake the gratin took a bit of time but it was pretty easy and the results were well worth the effort. The zucchini and farro gratin turned out really well! It was nice and creamy and ooey gooey and cheesy and good. The grated zucchini worked really well in the gratin and the farro added nice chewiness while the panko topping brought a nice crunch to finish it off. Despite the fact that is served this as a side dish I went back for seconds! I had a jar of salsa that needed finishing and I tried serving it on the leftover zucchini and farro gratin and it worked surprisingly well adding a nice touch of heat. What a great start to zucchini season!