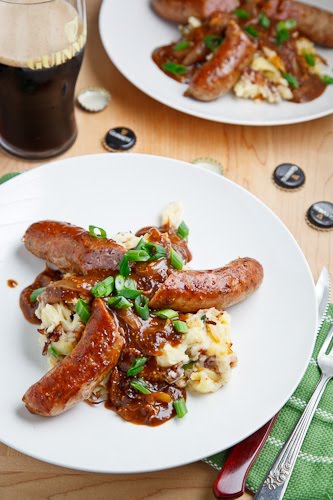 Bangers served on Irish colcannon and smothered in a sweet, savoury and malty Guinness onion gravy.

Over a half a year ago I came across a recipe for Bangers and Colcannon with Guinness Gravy on What Lolita Eats and I immediately thought that it would be a perfect recipe for St Patrick’s Day. It was difficult, but I resisted making it right away, bookmarked it and waited impatiently for St Patrick’s Day to arrive and it was finally time. This dish consists of pork sausages that are served on colcannon, an Irish form of mashed potatoes with bacon and sauteed cabbage mixed in, and topped with a Guinness gravy. You really cannot go wrong with creamy mashed potatoes, bacon, sausages and a tasty caramelized onion gravy made with Guinness and it is pure comfort food! The recipe takes a bit of time to make but it is pretty easy and if you multitask it will come together even faster and it is definitely worth the effort. 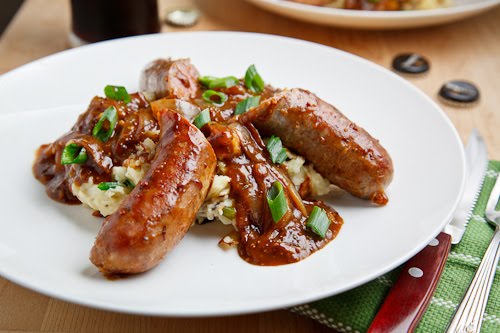 Bangers served on Irish colcannon and smothered in a sweet, savoury and malty Guinness onion gravy.