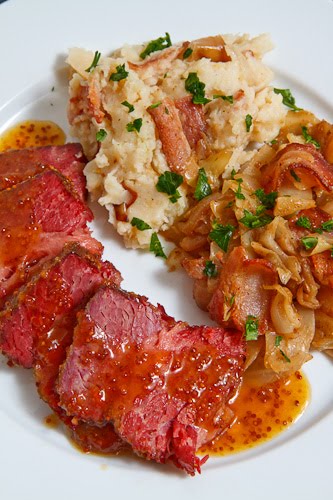 I don’t know what it is about St. Patrick’s day but every year I seem to go all out and this year was no different. Last year I came across this recipe for apricot glazed corned beef with sauteed cabbage and colcannon on Sticky Gooey Creamy Chewy a bit late to make it in time but I have been patiently waiting and now it was finally time to try it. I have used apricot glazes in savoury dishes before so I know that they work well and the honey dijon glazed corned beef that I made last year was a great success with its sweet and tangy glaze so I knew that this one would also be great.
This corned beef recipe was a slow cooker version and one of the things that I liked about it was that everything was “pre-cooked” together in the slow cooker and once that was done there was very little effort required to finish everything off. I did run in one problem and that was that I was unable to get a 3 pound corned beef and the 5+ pound corned beef that I ended up with was too big to fit into the slow cooker. After a few minutes of worrying I decided that it was not a problem as I have cooked corned beef on the stove top before and I could simply cut the beef in half and do half in the slow cooker and half on the stove. I also decided to make one a little larger and use the apricot glaze on it and the smaller half I would just save for another dish after it was cooked. I really liked that after placing the beef in the pot you could pretty much just walk away and leave it for a few hours with no effort require. 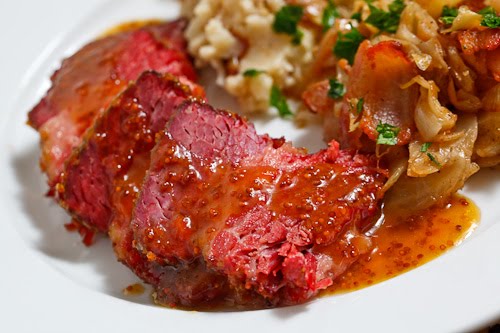 Both the slow cooker version and the stove top version came out beautifully and the larger one from the slow cooker got glazed up and popped into the oven right away. While it was finishing up I quickly made the colcannon and the sauteed cabbage, neither of which were too much trouble. The corned beef turned out nice and tender and although I think I prefer the honey dijon glaze, the apricot glaze was definitely a keeper! I served the corned beef with some extra apricot glaze for even more apricoty goodness. Overall, this meal was one of the best that I have had in a while and I am definitely looking forward to enjoying the leftovers for lunches this week. I also already have plans for that second, unglazed corned beef. 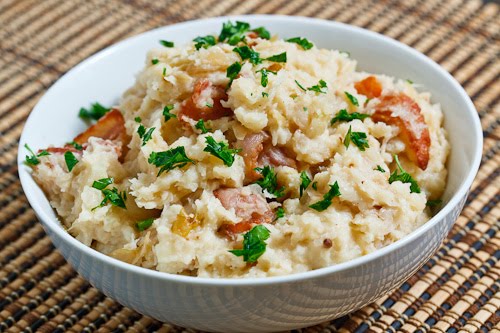 Colcannon is an Irish version of mashed potatoes that also contains cabbage or kale. You really can’t go wrong with creamy mashed potatoes but I liked the sound of adding some roughage and I could not help but noticing the bacon in this recipe. One of the good things about making colcannon when you make a corned beef is that you can throw both the potatoes and the cabbage into the pot with the beef to cook and they will absorb all of that extra flavour. Once the potatoes and cabbage came out of the pot all that was left to do was cook the bacon and saute the onion and cabbage a bit before mashing everything up. The colcannon was so good! The potatoes were nice and smooth and creamy and the cabbage and potatoes added a nice texture. 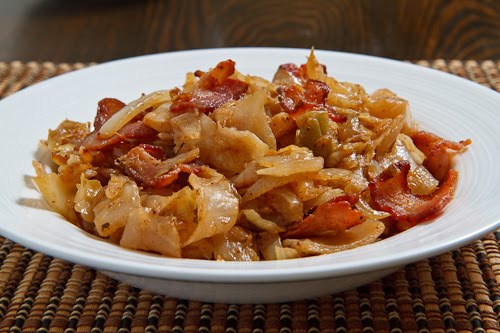 Slow Cooker: Mix the water, sugar, vinegar and garlic in the slow cooker, add the corned beef, and the pickling spices and cook on low for 8-10 hours or on high for 4-6 hours before continuing on with the remaining steps.

Cabbage sauteed with bacon makes for an easy and tasty side dish.