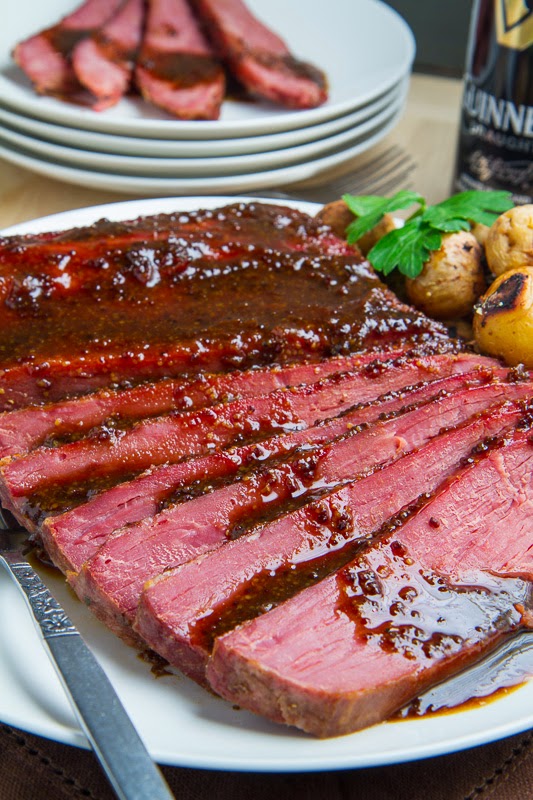 Corned beef slow cooked in Guinness and served in a tasty Guinness glaze.

With St Patrick’s Day coming up I have been planning my menu and the main course almost always has to be corned beef; it’s just so easy to make, it’s always tasty and there there are so many different ways to make it! A slow cooker or crock-pot makes cooking corned beef a sinch, you simply put the corned beef into the slow cooker in the morning and then at night you pull it out and it’s ready to go. Of course you can change things up by changing what else goes into the slow cooker with the corned beef like the liquid that it is cooked in. Sure you could just use water, but why not add some flavour by using another liquid? This year I was dead set to combine another St Pat’s Day favourite, Guinness, an Irish stout, with my corned beef and the first step was to cook the corned beef in Guinness in the slow cooker to infuse it with it’s flavour throughout the day long slow cooking. I certainly couldn’t let all of that Guinness go to waste after the corned beef was done cooking in it, I mean not only was it Guinness but now there was also all of those tasty corned beef juices mixed in! The solution was easy and while I let the corned beef rest before slicing into it I turned the Guinness and corned beef juices into a tasty glaze by adding some brown sugar, grainy mustard and Worcestershire sauce and then simmering to reduce and thicken it into a glaze. Once the glaze was ready, finishing the corned beef is as easy as removing the layer of fat, glazing and then baking until the glaze is a bubbling and caramelizing and good! With this Guinness glazed slow cooker corned beef, this years St Patrick’s Day is going to be one of the tastiest yet!
Feel free to throw your veggies into the slow cooker to cook with the corned beef but if you would prefer that they not taste like Guinness you can make them separately, which is the way I went. 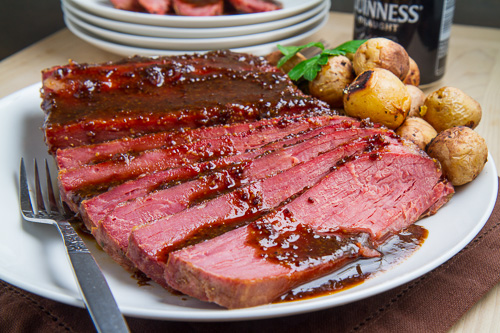 Just look at that amazingly addictive and tasty Guinness glaze! 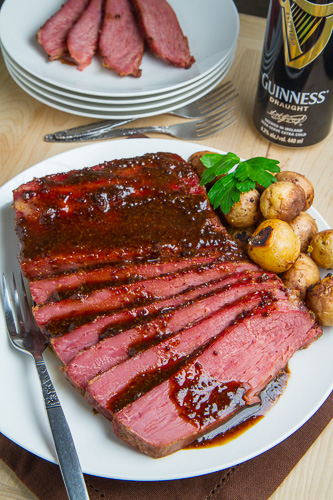 Corned beef slow cooked in Guinness and served in a tasty Guinness glaze.