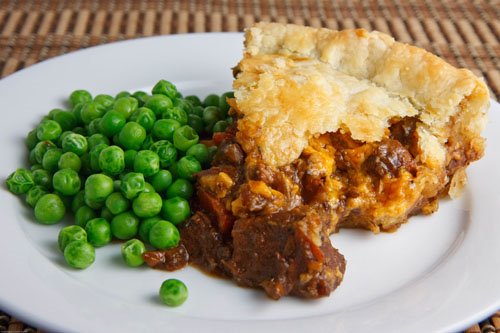 Last month with St. Patrick’s day I saw a lot of beef stew recipes and something else that caught my eye; a beef stew pie. A beef stew pie is pretty much like it sounds, beef stew that is baked in a pie. That’s right, beef that is slowly braised until it is fall apart tender and full of flavour that is baked into light and flaky golden brown pastry…mmm… To make things even better the beef can be braised in Guinness. Not to stop there but you can also add some bacon and brown the meat and saute the vegetables in the bacon grease for even more flavour. I knew that I would have to make a steak and guinness pie long before this point but then I came across an adaptation of Jamie Olivers steak and Guinness pie on The Cutting Edge of Ordinary that also included cheddar cheese! I would not have thought to use cheddar cheese to a beef stew pot pie but as soon as I heard it I knew that I had to try it!
I modified the recipe a bit so that I would have just enough to fill my pie plate with beef stew. I decided to go with an actual pie crust as my pie crust skills could use a bit of work. The steak and guinness pie turned out amazing! The pie crust came out nice and golden brown and it was light and buttery and flaky both on the top and the bottom. After braising for three hours the beef stew was so full of flavour that it would have been wonderful all by itself but then it was wrapped with the pie pastry and topped with a layer of melted cheddar cheese and it was sublimely good! This was one of the best meals that I have had in a while! This recipe is definitely a keeper. I went with a classic pairing and served the beef and guinness pot pie with a side of peas. 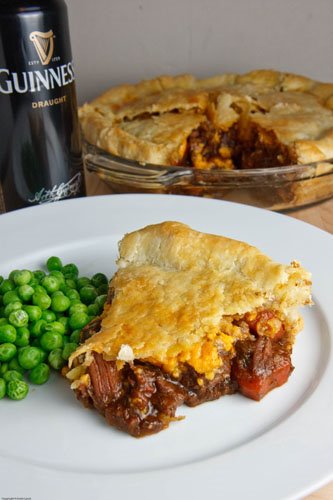 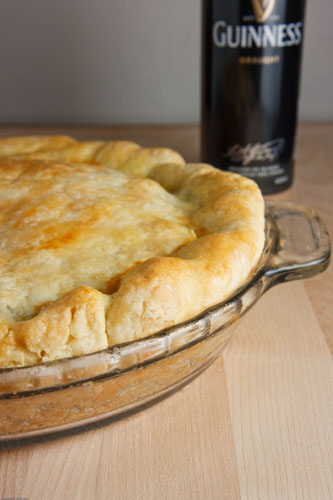