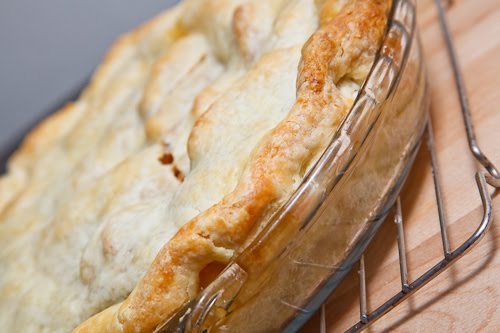 I just realized that despite the fact that I have been posting about pies for a while, that I have not actually posted the pie crust recipe that I use. Although it is perfectly acceptable to use store bought pie crusts I like to make my own especially if I am not rushed for time. My first few attempts at making a pie crust did not turn out too well but I stuck with it and now I am enjoying making them. With a little practice they are actually fairly easy to make. The trick is keeping everything nice and chilled.
If I am not rushed for time I like to cut the butter and then chill it in the freezer for a bit. Then next important step is the water. You want to add enough water that the dough starts to clump and enough that it is going to stick together when you roll it out but not too much. I find that 5 tablespoons of water usually works out well. Ideally when you have mixed the water into the flour and butter to form the dough you should be able to see small bits of butter in it and it is these bits of butter that are going to make the pie crust nice and light and flaky. After you have formed the dough you want to chill it in the fridge before rolling. Chilling it in the fridge helps ensure that those bits of butter don’t melt and that they remain as bits of butter in the pastry. After the pastry has chilled in the fridge it is time to roll it out. You will want to wait a few minutes after pulling it out of the fridge to let it warm up just a bit so that you can roll it easily without it crumbling. Once the crust has been rolled out you will want to lightly fold it in half 2 times and transfer it to the pie dish and then unfold it and fit it into the pie plate. After you have fit the pie crust into the plate you will want to use it right away or put it back into the fridge until you are ready to use it. The uncooked pie crust freezes well so you can make them ahead of time and use them when you need them reducing the amount of effort that a pie takes to make.
This recipe make one pie crust so if you are making a pie with a top and bottom crusts you will need to make this recipe two times. To help get those nice golden brown colours to the pie shell you can brush it in an egg white and water mixture before baking. If you are going to be baking the pie for a long period of time you can cover the crust with foil and then remove the foil for the last 30 minutes of baking time to help ensure that the crust does not burn.
Note: This pie crust recipe works equally well for both sweet and savoury pie. For a sweet pie you may want to add an extra tablespoon of sugar to this recipe.