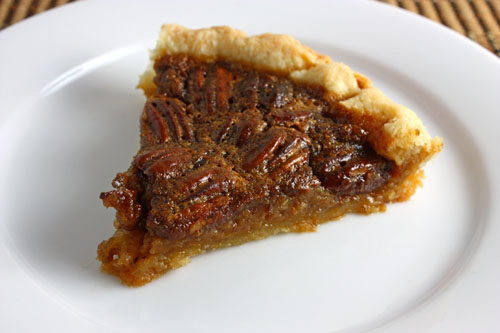 A pecan pie with a maple bourbon filling!

Dessert is an important part of a holiday dinner. It should be a climatic finish to a meal that entices those whom have already eaten too much to partake in one last sweet bite. I thought that a pecan pie would finish off my Thanksgiving dinner perfectly.
After a bit of research I found that pecan pies are pretty much a sugar/syrup custard with pecans in a pie shell. The filling is generally made with sugar, corn syrup and it is thickened with eggs like a custard. While I was searching for recipes I came across the concept of a maple pecan pie and I was immediately sold on the idea. In a maple pecan pie the corn syrup is replaced with yummy maple syrup. I used the recipe for the pecan pie filling that I found on Joy of Baking as a start and replaced the corn syrup with maple syrup. 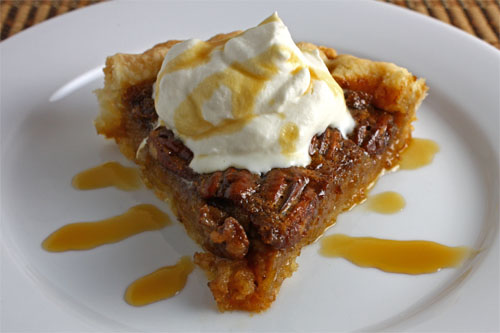 The maple pecan pie turned out great!! It was nice and sweet and I really enjoyed the maple flavour and the custardy texture. Toasting the pecans before hand is a must as it brings out their full flavour which really finishes off this pie nicely. I am still working on my pie crust technique and this one was by far my best one yet. The crust had a nice texture and it was light and flaky and golden brown. The only problem was that the edge caved in a bit but it was caught by the filling which held it up. The pecan pie was great all by itself but to make it even more decadent I served it with some maple whipped cream and drizzled it with some maple syrup and it was amazing. Just drizzling the maple syrup was not quite what I was going for so I tried reducing some maple syrup in a sauce pan for a while. The reduced maple syrup turned into a sticky, gooey maple caramel sauce which was so good! I enjoyed eating the left over pecan pie both cool from the fridge and warmed. I will savour the few slices that I have remaining but I know that I will be making this again soon! 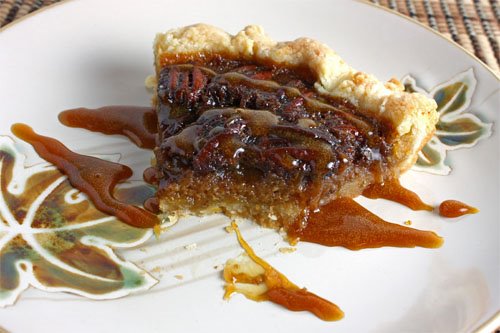 A pecan pie with a maple bourbon filling!