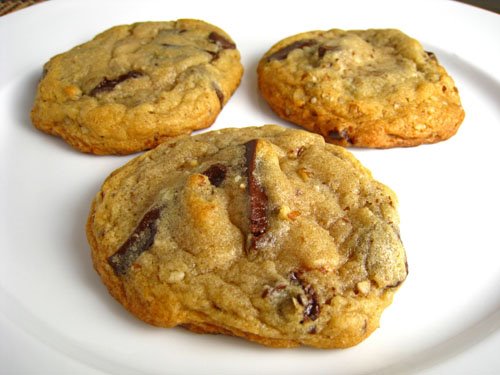 Chocolate chunk cookies are one of my favorite treats. When I was at the grocery store on the weekend I noticed a new brand of chocolate chip cookies. The package advertised two main selling points: 1. They were made with real butter. 2. They had more chocolate than any other ingredient. The cookies sounded pretty good and I was immediately craving chocolate chip cookies. I was almost thinking about getting them but I quickly realized that I would have much more fun making them myself.
They recipe that I normally use for chocolate chip cookies already had real butter and more chocolate than any other ingredient so I was set to go. But, I wanted to play around a bit and I had recently seen a few chocolate chunk cookie recipes that called for pecans. I though that the pecans would add a nice flavour to the cookies but I was in the mood for the texture of a plain chocolate chip cookie. I decided to try pulsing the pecans in the food processor so that they would give the flavour without changing the texture too much.
The cookies turned out really good! I of course could not resist trying them while they were still warm from the oven. They were nice and soft and gooey on the inside and a touch crispy on the outside. They pecans added a nice yet subtle flavour that I enjoyed. I placed some of the cookies in the fridge after they cooled as I like the texture of the cool chocolate in a chocolate chunk cookie. 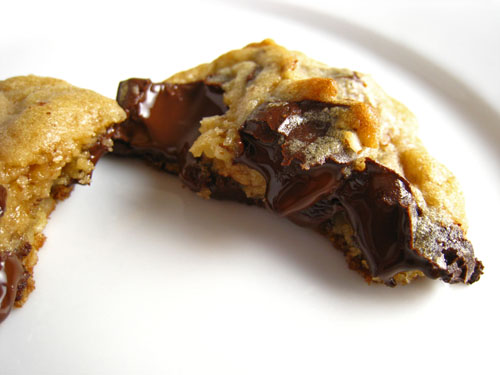