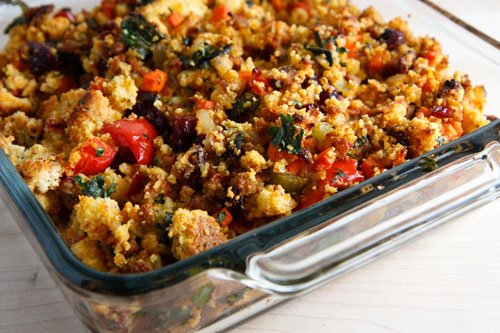 I was looking for a side dish for my texmex style turkey dinner and I had been wanting to try making a stuffing for a while so I combined the two and made a texmex style cornbread stuffing. For the corn bread I used the cranberry corn bread that I had made the day before. I had seen a lot of more standard stuffing recipes use sausage and I thought that adding spicy chorizo sausage to the corn bread stuffing would be a good idea. I then added some more texmex flavours like chilies, cumin and cilantro. I made it more ‘holiday’ like by adding some dried cranberries in addition to the cranberries that were already in the corn bread. Since I was only cooking a turkey breast I could not actually stuff the stuffing so I cooked it in a baking pan. The texmex corn bread stuffing with chorizo turned out really well. The slightly sweet, moist, and coarsely crumbly corn bread worked well in the spicy stuffing. The stuffing was nice and moist and tasty and had just the right combination of sweet and spicy. It was a great side for the maple and chipotle turkey breast and it was even better with some maple and chipotle gravy and jalapeno cranberry sauce on the fork as well.