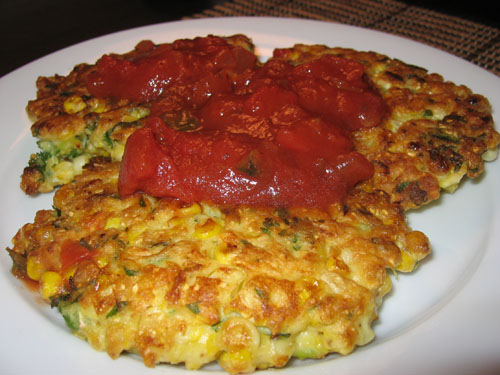 I have really been enjoying the fresh local corn. I have mostly been eating it off the cob with salt and butter, which is great, but now I was looking for something different. I recalled seeing Michael Smith on Chef at Home on the Food Network making these corn fritters that looked pretty good. Since corn was not in season at the time I had bookmarked the recipe to try later. His recipe had cheese and there was maple butter, but I was thinking more Mexican. I dropped the cheese and maple butter and added some cumin, cilantro and lime and then topped them with some salsa. They were really easy to make and pretty tasty. I liked the slightly crunchy texture that the cornmeal gave them. I was thinking that it would have been nice if I had some sour cream at the time.